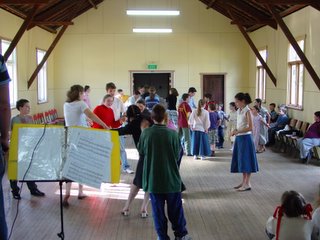 Last Saturday the local homeschoolers organised a bush dance. This is similar to square dancing with a caller, traditional country music, and lots of swinging and set moves. As this was not far from home we just walked, and the boys rode their bikes.
Twelve families attended which meant about 24 adults and around 80 children from a baby just two weeks old to an older brother 24 years old. This photo was taken earlier in the day with only some of the attendees dancing. Ariel is in the red going round in a circle.
Whilst the sun was still shining many of the boys were outside playing footy or running around playing other games (dancing was not the boy's highest priority). In fact, there were so many boys playing some of the village boys joined in after telling their Mum, "There are boys in the park playing footy. Lots of them!"
Many of the adults socialised outside (officially keeping an eye on the children) or in the back dining/kitchen area.
Each family put in $10 to cover hall hire, some drinks and disposable plates and cups and also brought a dinner and dessert to share. From the start at 4:00pm to 9:00pm the time flew quickly by. Everyone dancing had red faces from the pace of dancing. Peter was spun a bit fast in one set and went flying face down onto the floor. He went home with Lana and a tired Rose.
We have this type of event several times a year. Homeschooling families attend from up to two hours drive away and is a perfect example of positive socialisation. Our children think this is normal, as it has been normal for countless generations going back in time. We are getting to experience fun times with other families and children ranging widely in age. Bigger children assist smaller ones, and the smaller children learn from older ones around them. Adults are in authority, but it is the loving authority of parents. When it was getting a bit chilly outside I called my smaller ones in and then asked the others to come in too. As I was a Dad, they saw the "Dad look" and came along without a fight.
All in all a most enjoyable afternoon.
at 12/07/2005 09:51:00 pm

Ah, the dad look. I've not mastered it yet, having inherited a couple of my girly's children.

We were practicing, the other day, my "dad voice" on my girlfriend's youngest. He was saying, "No, make it sound more deep," and "That's better."

We had a lot of fun, with me telling him to do something, and then him telling me how much it made him do it. :)

It involves a combination of stance, voice and eye contact. One glance and the child knows that the odds of a happy near future lie with compliance.
It isn't fear of consequences. It is more weighing up the pros and cons and then deciding they might as well go along now than have a big hoo-ha and go along later anyway.
Lana somehow had the "Mum voice" when our oldest was 3. A 21 year old was about to invade her country in Risk and Lana cried "No!". He stopped. I told him to go ahead, but the "Mum voice" kinda works!

Oh yes. And luck. Your timing has to be right. Sometimes it doesn't matter what you do!