Bruggietales in the Carnival of Homeschooling

We were part of the original Carnivals of Homeschooling many years ago but have been quiet for the last few years.
But our post regarding alternative means of qualifying for University/College entrance is included in this week's edition at Corn and Oil at the Post Olympic Carnival of Homeschooling.  Enjoy.
at 2/26/2014 11:18:00 pm No comments:

Preparing for the future - but not by doing year 12

When we first started homeschooling over 17 years ago, among all the questions was: "What will you do about year 12 and University?"
At the time we simply answered, "We will cross that bridge when we get to it." and "We just do one year at a time and see how it goes." which deferred the problem until a future time.

We have been quiet on Bruggietales for the last few years because we have been working on the answer to that concern from complete strangers about the welfare of our children.
My theory was that children have the capacity for much more but are rarely given the chance. In the age of sail 15 year olds were lieutenants in the army and navy and were working in responsible positions throughout the economy.  Why not ours?
So we bought a shop.  It is a country store which sells everything as well as being the local Post Office agency and we added in a cafe and restaurant. We then put Ariel (then 17 years old) in charge. My business is integrating business systems so I was initially heavily involved setting up systems and working how the store should run, liaising with suppliers and generally training Ariel how it all worked.  As each child got older, they were added to the employee pool.
The children were also paid award wages and conditions and everything was run as a professional business. In this way they were able to learn not only business skills but also personal money skills.
However, in this world that suffers from credentialism - that is, the requirement that a bit of paper means much more than mere experience - this was insufficient to answer that question from so long ago.
So we utilised the traineeship/apprenticeship schemes in place to foster staff training.  We signed up each of the young people who worked for us full time - both our children and other young people who we employed - into a Level III certificate in Retail Management.  This is equivalent to a TAFE (like a US community college) course.  Not only did this provide the young people with a framework within which all the experience they were getting made sense as part of the greater business structure, it also counted as a study pre-requisite for University enrolment.
Normally children complete a gruelling and stressful year 11 and 12 (called the HSC - Higher School Certificate) which then gives them a score which can be used to get into the standard entry stream of University enrolments. But you can also enter University showing prior studies and this works just as well.  And as the Level III certificate counts as tertiary studies, you're in.  Of course, this depends on the degree the young person wishes to study, but the principle is sound.
When Eric was 17 he applied and was accepted to the online open university and they accepted his qualifications.  He worked out that a University degree wasn't for him, but we proved that the Certificate III was sufficient for him to enrol.
Through our store we have now provided two of our children and three other young employees with Level III certificates.  Ariel actually completed a level IV certificate and Diploma in Business management.
Even though the business is basically break even - and a loss in the early years - the net cost was less than school fees for year 11 and 12 and TAFE fees.  And the children earned full time wages.
So now when we are asked what we will do for HSC and qualifying for University we can answer, "We'll buy a business."
at 2/22/2014 12:18:00 pm 2 comments:

One very important thing I have learned since moving to the country about 14 years ago is that water is a scarce resource and rain is always good.
Our water supply is supplied by the rain, falling on our house and garage and flowing down the gutters into our water tanks.  The tanks' total capacity is around 90,000 litres (about 24,000 gallons) with which our total water needs are met - drinking, bathing, washing - the lot.
We use water efficient devices and turn off taps when not in use and are generally pretty conscious of our water usage. Even though the worst of the drought is behind us where we live, we continue to monitor the water levels.  So when it rains enough that the water tanks overflow, it is an exciting time.  Especially in the warmer days of Summer.
"Go outside and enjoy the rain!" we tell the children and off they go. We figure the fresh rain and clean air helps all the plants grow and it doesn't do the children any harm at all.

Playing in the playground - come rain or shine

By getting the children to clean up the playground and put some effort into the thing, they have started to use it more.
Although the skies were overcast this afternoon, I told the younger boys to "Get outside and run around!"
"But it might rain," they replied.
"When has playing in the rain worried you? Get a raincoat or something."
Martin and Zach looked at one another and ran off.
Next thing I knew when I looked outside were the two boys in the top of the fort, with Martin spinning the wheel yelling "Ahoy!" and Zach looking through the spy glass.  In the bucketing rain storm.
Ah.  They can always have a bath when they get back inside. A bit of rain helps them grow.

Our playground has become a bit neglected over time but it is still there ready for some love and attention.
The other day the children were complaining they had nothing to do.
"Nothing!" said Lana, and that got some action happening.

The children are now looking after the playground.  Today they are weeding and clearing.  The other day James helped and they did a massive cleanup of the clutter that gradually had accumulated over time.  The trailer that is ready for the tip/waste is now quite full.

With a bit more work over the coming weeks it should be back up to standard and we should see the children playing there more often.
at 2/15/2014 02:22:00 pm No comments:

Threats of a 3 year old

Zach has decided to issue ultimatums if he doesn't get his way. He has also discovered that the result isn't always what he expected.

1. He was asking "Why?" a lot at one point.  Then he asked James for something and James said, "No."
"If you don't, I'll ask 'Why' again."
We thought this was a clever threat, but he didn't get what he wanted.

2. Zach wanted Ariel to give him some chocolate.
"Give me some chocolate," he demanded.
"No," answered Ariel.
"If you don't, I'll take this." Zach said, holding up something insignificant.
Ariel shrugged and said, "OK"
So Zach took the insignificant thing and walked off.
A few moments later he returned and asked Ariel, "Guess what I've got behind my back?"
He still didn't get his chocolate.

3. Lana was making muffins in the morning and putting the mixture into the trays.  Zach had already licked the beaters and the scrapers.  Some of the mixture had dripped on the tin rather than in the muffin papers and Rose wiped it off with her finger and licked it.  Zach saw this and wanted to be closer to the muffin trays so he could do the same trick.
He demanded to Rose, "Pick me up or I'll do this!" and pulled the face in the photo above.
Lana and Rose looked at each other, smiled and continued on with their muffin task.

A great day to drive

Lana's Bug (1968 Volkswagen) is back from the mechanics and is running really well.  Starting, on the other hand, is more of a challenge.
Considering the wonderful Summer weather today - a clear sunny day in the mid 20's (70's F) and should be rising to the mid 30's (90's F) by this afternoon - we decided to give the Bug a whirl.
So we took off the top, jump started the car and went for a drive planning on not stopping until we got back home. With sunglasses in place, sun caps on our heads, smiles on our faces and the important jumper leads in the back, off we went.
The drive was great and we thought it would be a good idea to pop past and see Eric so we sent a Selfie and a text.  We told him we couldn't stop - and we meant it literally!

Unfortunately, although we tried to keep the engine running while we chatted, it still sputtered and died.  We tried a push start a few times. Eric and I pushed downhill and then uphill and then sideways.  But we were rewarded with only a couple of splutters of hope, and then nothing. Luckily, a neighbour popped out and noticed the cute bug, looking sad and forlorn, and helped give us a jump start. We were quickly back on our way again!
The ride home was uneventful, with the normal waving and smiles from onlookers.
Once home the children wanted a ride too, but we told them we would have to wait until we get the car looked at so it would start when we wanted it to.
"OK," they reluctantly agreed.

My own armour - It's my lucky day

Peter was instructed to distract Zach as he was being a nuisance whilst everyone else was doing schoolwork.  So they began some sword fighting.
Zach had Peter's sword and Peter had to back off every time Zach missed with his wild swings. After each swing Zach sat down.
Peter asked him, "What are you doing?".
Zach answered, "I'm thinking."
After a few of these swing and sit down cycles, Zach decided to go inside and Peter suggested, "How about I make you some armour?"
Zach looked at Peter with a huge smile and said, "This is my lucky day!"
An important part of the art of cardboard armour is to measure it up and use lots of duct tape and plenty of old boxes from which to get cardboard.
The hardest part about measuring Zach was keeping his attention. Peter often had to retrieve him from riding a bike, running up and down, standing on his head and more to ensure the right fit.
Luckily Zach's head is big enough that Martin can wear it too.
"How about we make it my armour and yours?" suggested Martin.
"OK" said Zach. So now we have shared armour - double the fun!
at 2/09/2014 11:47:00 am No comments: 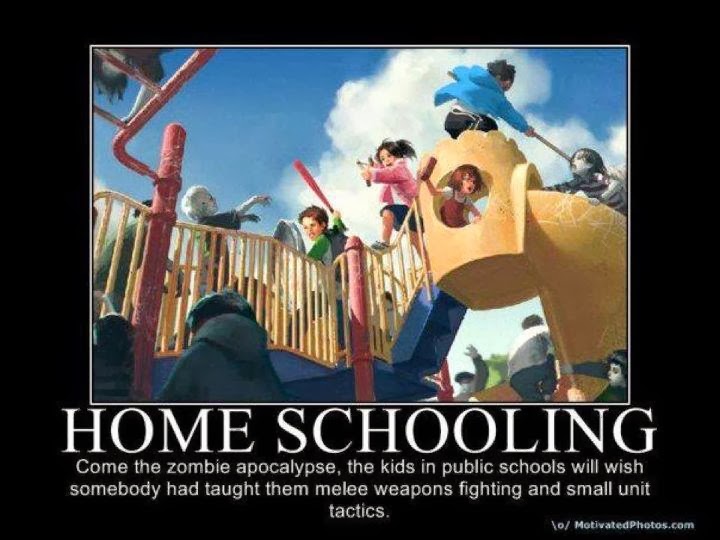 I am not sure where we found this fine image but it reminded me of the fun the children have had in the back yard, chasing each other with wooden swords or guns.
Cool.
at 2/02/2014 06:57:00 pm No comments: