We now have two kittens. The Ginger one is called "Coffee" and the patchy one is called "Tea".
We had resisted any animals for a long time, but have finally succumbed.
Before Christmas a dog - some type of Jack Russell cross - adopted us. His real owners had moved out of town and left him behind. They supposedly wanted the dog, but weeks went by with one failed attempt (the dog went walkabout the day they visited) and vague promises.
Meanwhile we were visiting friends whose cat had just had kittens. One of the reasons we had avoided pets was because we had to worry about them whenever we went on a holiday. Our planned US trip has been cancelled because of the global economic challenges and changes to foreign exchange rates. And we have bought the shop, so our travelling will be reduced.
James has wanted a pet for some time so I relented and we agreed to pick up the kitten in a few week's time when it was older.
On a Monday evening I popped past our friends' home and picked up the kitten. The kitten got lost somewhere in the car on the way home but we found him in the back somewhere and all were excited at the new addition. The dog was VERY excited. So excited that on the Thursday Martin left the door slightly ajar, the dog rushed in and killed the kitten in seconds. Trauma, distress and sadness all round.
The dog was promptly given to his owner's relatives who lived in the town. We then asked if there were other kittens around.
Next day we received the two female kittens.
The hardest part about the kittens? Training Martin to handle them with care. But I think this photo is showing how he is improving. At least he has them cleanly around their waists.  Or that is where he began holding them but they have squirmed out of position.
at 1/29/2009 10:30:00 pm 4 comments:

What did you get for Christmas? 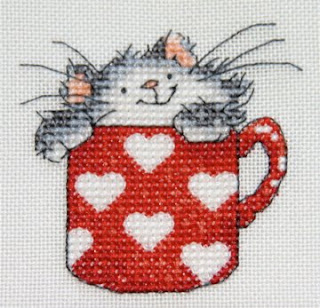 Many have asked us where have we been.  It has been a month since our last post and we have a pretty good excuse.  We have purchased a General Store and Post Office.  That was our Christmas present!

The shop also has an active coffee shop.  Our aim is to upgrade the presentation and quality and consistency of service and ingredients.  We are using experienced Baristas (the fancy title for those that are experienced in making coffee) to train all our staff.  I have learned lots about the art and science of making a quality cup of coffee!
Lana and her mum have been making tablecloths for the coffee tables, I have been designing all the printed material and it is looking pretty good. 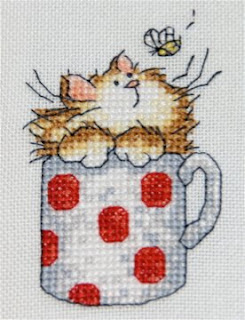 The two photos here are some of the clever little cross stitch patterns Lana has been stitching.  They will be placed appropriately around the shop to improve the country/homey feel of the place. The pattern was part of the UK CrossStitcher Magazine Issue 198 (April 2008). Margaret Sherry is the clever designer and the set is called "Coffee and Cuddles".  They are pretty cute pictures.
We will have more cross stitch pictures coming soon as Lana has now some new wall space to fill with her artwork!
at 1/26/2009 03:17:00 pm 4 comments: