We had quite a few emails and replies to our beard poll. Surprisingly, the overwhelming response was to keep it. Interesting comments included:
"You look like Michael Moore! So either the beard goes or you get a baseball cap." (Against - Aust)
"It looks very distinguished" (For - Local)
"Kinda gives you that distinquished look" (For - Local)
"It is Christmas time and it resembles Santa, It does make you look older but in a good way (not too much older)" (For - Aust)
"Makes you look too old" (Against - Aust - David's Dad)
"When in Rome ..." (For - Aust)

The night Ariel blew up!

One Friday evening in mid January Ariel said she had a headache. In Australia we would normally have used Panadol (Paracetemol). Here the choice is Tylenol or Ibuprofen. We had some Ibuprofen so she was given some of that and went to bed. Next morning Ariel awoke and said her face felt “a bit puffy” Without looking up, David said she should go back to bed and sleep in. Lana had a look and suggested David look closer. Ariel’s face was very swollen – she could hardly see out of her eyes and the every part of the face was big. He was up in a flash and told Ariel to get dressed. They were going to the doctor’s.

There is a doctor’s surgery in Blairsville that provides for “Drop ins” – that is, no appointments. They went to the reception and without looking up, the receptionist asked what we required, and David pointed to Ariel and said, “Guess.” This certainly got a reaction at the sight of Ariel’s swollen face, and she quickly checked if Ariel was having difficulty breathing. If she had been it would have been off to the hospital.

After a wait of about one and a half hours they finally got to a consultation room. An assistant came in and asked lots of questions, carefully recording the answers on a chart, went out and returned and gave Ariel some medicine to help with the swelling. After 20 minutes, the doctor appeared, read the same chart which had all the answers and asked the same questions the assistant had asked. Finally Ariel was given an injection with some medicine to reduce the swelling and they were told to wait another hour in the waiting room to ensure all was well.

Once the hour was up, they were told they could go. Ariel’s face was still slightly puffy Sunday Morning and was back to normal by Monday. Ibuprofen is part of the drug group known as NSAIDS. We then did some research and worked out all the brand and generic names that belong to that group – including aspirin – and ensure that every time we go for any medicine or medical procedures we mention the risk of Ibuprofen. Total cost? $140.00. Lucky we had insurance!

We have no photos to show you. Ariel would never have forgiven us the embarrassment – and we can’t blame her for that.

Here is a recent family photo from Christmas 2004. 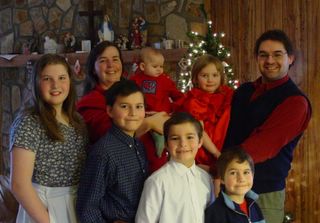 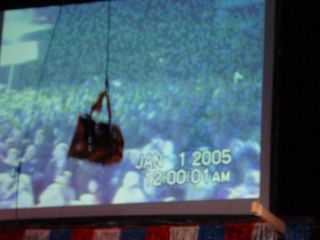 Some patriotic songs and the National anthem were sung, and it was time! The cage containing the possum was dropped (not too fast so the possum wasn’t hurt) and the fireworks went off. At about 12:10 everyone looked at each other, wished “Happy New Year” all round and went home.
Why go to New York, when you can experience this! 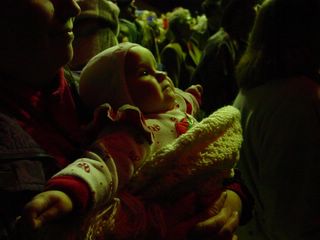