What do you want to be? 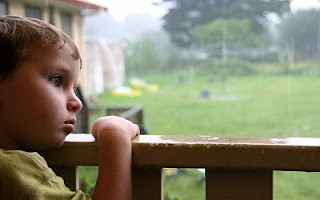 After communion last Sunday I was kneeling next to Martin "negotiating" some prayers. I noticed him looking at the priest so I asked, "Would you want to be a priest?"
"No." Martin promptly replied.
"What do you want to be?" I asked, surprised by the firmness of his answer.
"4." (He will be 4 years old soon.)
Once I had recovered and whispered this delightful response to Lana, I tried again.
"What about after you're 4?  Would you want to be priest then?"
"Yep!" he answered cheerfully.
It's very important to do things in the right order, you know.
(I have used this photo previously but it captures Martin's thoughtful mode very well.)
at 2/24/2011 09:06:00 pm No comments: 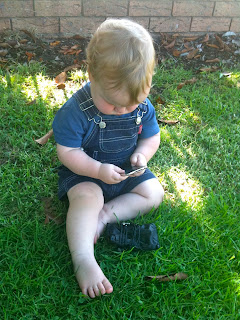 Children are starting earlier and earlier these days!
Here is Zach using Eric's iPod Touch before Mass last week.  Well, if you can define "using" as playing with the thing in his hands.  But the photo does make it look like he is quite competent with those chubby fingers.
Not too surprisingly we are quite a high tech household. As I upgrade computers for my work I keep the older machine for the family to use.  We currently have a wide mix of Macs, Windows clones and iPods, iPod touches, iPad and iPhone.  They are all integrated over the web as well as using our home wired and wireless network.
It is great fun having me and the 3 boys all in the same game.  In one game based on Lord of the Rings, we were all on one side.  As James' Gondorian soldiers were outside his fort being heavily outnumbered by more and more orcs he called out, "Can anyone help?"
Next moment my Rohan riders came charging in and clearing the screen of nasty orcs, saving the day.  Dad to the rescue!
at 2/06/2011 08:12:00 pm No comments: 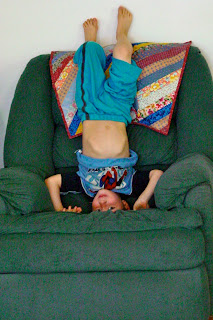