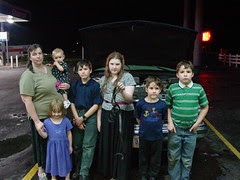 Stranded in Tennessee
AAA didn't really provide much help for this. I decided that as it was just a fan belt I could replace that, but I wanted to be in Chattanooga to expand my options. Checking my GPS thingy I started to call hotels. The first few had no rooms until I finally found "Alpine Lodge". OK. So now we had a room but no way to get there. The hotel gave me some phone numbers for taxis.
I called the first one and asked for a taxi to transport 7 people (I would go with the tow truck). They had one, but he wanted cash too!
Meanhwile AAA called back and asked what we were doing. They suggested I call 911 for assistance. I replied that I thought that was for real emergencies. I suppose being stranded in the middle of nowhere with 8 people and a dead car could be an emergency, but who would I talk to? Police, Ambulance or Fire? What a stupid suggestion!
I had an ATM card, so I gave it to Lana. She would go with the taxi to the hotel via an ATM and get cash to pay the taxi and the tow truck when I arrived.
AAA was notified and they dispatched the driver. Without payment confirmation he was just waiting.
The taxi arrived and out came "Big John" (that was his name). He was a big black guy, rings on most of his fingers, gold chains around his neck, shoulder length greasy hair and originally from the Bronx in NY. He was actually a really nice guy. As he was leaving I looked at him in the eye and said, "You've got all my family there." Shortly afterwards I was left standing on my own around midnight next to a dead car waiting for the tow truck with my family driven off into the night. That was quite a lonely feeling.
We finally got to the hotel around 1:00am, paid the taxi $80, tow truck $70 and the hotel doubled the price when they saw we had 6 children. As the room size didn't change I don't see how they justified it.
Anyway, by 2:00am we were all in bed/floor/sofa, with a dead car parked outside wondering what tomorrow would bring.
at 6/13/2005 12:39:00 pm