Throughout our travels we missed any bad weather. It did follow us around. Just after we left Nebrasksa they had very high winds. Just after leaving Georgia they had lots of rain.
But once we stopped, Hurricane Ivan came through the area. Power went out at about 8:00pm and the winds were very strong. One of the power workers was killed trying to reconnect power during the storm. We were fortunate that no major damage was caused by the storm although lots of trees were down around the towns.
David had to move a few fallen logs to get through and then was stopped at the bottom of the hill by two downed trees. The whole area was abuzz with people clearing trees, fixing roads and trying to regain power.
The creek was very full and trees had their root supports washed away so there were plenty of trees along the creek knocked down.
With no power we had no water. Also, the power fluctuations damaged our fridge so it wasn’t keeping things cool. With no idea when power would return and no water, we ended up staying the night with the Floyd family.
After a”breakfast of champions” made by David Floyd, we were able to return to a powered home.
We just had the edge of the hurricane. We can only imagine the much worse situation for those in Florida with four hurricanes going through in such a short time. 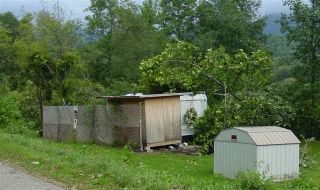