Dodge City - the home of Boot Hill and cowboys, gunfighters and Saloons. We arrived at Midday to a load siren wailing so loud that we couldn’t hear ourselves talk. It lasted for about 5 minutes just as we stopped at the information center. David asked the men behind the counter, “What’s the siren for?” They looked at him and replied, “What siren?” With a smile, David said, “Don’t give me that. Tell us.” It is sounded every Wednesday at 12:00 midday. It is the Tornado Warning system. If you hear that (other than on Wednesday’s at 12:00) you are to go to the nearest shelter as a Tornado is coming!
They were very friendly at the information center and provided us with lots of information. They even gave each of the children a Marshall’s badge, on the proviso they follow 3 rules: Obey your parents, always wear a seatbelt and don’t let your parents drive too fast.
As we signed the guest book, we were given a pin to place where we were from in a map of the US or one of the World. As Australia was more interesting to them than just Georgia, we put another one somewhere near Goulburn.
We then went to the Boot Hill Museum. The self guided tour started with a video, then a small museum on boot hill near the famous Boot Hill cemetary, and then the replica of Front Street, modelled after the Front Street from 1870. However, as this was just after Labor Day - the official end to all things “Summer” and the holidays, it resembled a ghost town. Many tourist attractions only operate to Labor day. Once all the school children lose their freedom, their business slows right down.
As we were meandering through the buildings, examing the displays, we reached the end of the street. The old schoolhouse had a sign “open”, but it looked very quiet. Ariel wanted to go in, so we did. Inside was a chap doing some leatherwork and we had a good time learning how he made the fancy marking on the leather.
David said, “Well, we better mosey out of here,” and the man replied, “Do you know how to Mosey?” We answered (skeptically), “No” and he said, “Here, let me show you,” and he reached for his hat (“Need a hat to Mosey Properly”)
Place your heels at a right angle then move them slightly apart. Put your thumbs in your belt, bow your knees (like a cowboy that has been riding too many horses), make a mean expression and then saunter along. He had all the children practice.
Then a lady came in and our host said, “She knows how to Mosey”, and she immediately did the Mosey as we had just been instructed, although she said she needed a hat to do it properly. But the mean expression was pretty important. A side visit ending up being one of the more memorable highlights of the trip! 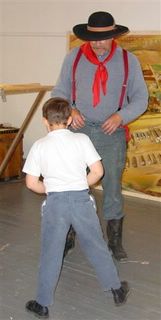