Whilst driving through Iola, KS, we saw a sign for Russell Stover warehouse direct candy. That sounded like a good idea so we followed the signs. Russell Stover makes Whitman’s chocolates and many in it’s own name too. They had lots of Easter and out of season chocolates and lollies (candy) as well as seconds - the ones that taste just as nice but were not quite the right shape or size. They are all over the country, but we were going past so purchased some chocolates. 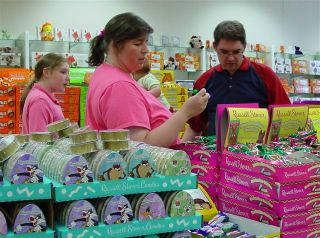 Looking for chocolate bargains at the Russell Stover factory

Driving across Kansas was strangely familiar. It is a very similar landscape to the area between Sydney and Melbourne in Australia. If you drive down the Hume Highway, the surrounding area of gradual hills, lots of fields and sparse townships was the same as Kansas. Also, when we did arrive at the towns, we noted how similar in style it was to country towns like Goulburn, Tarcutta and Wangaratta. Other than everyone driving on the other side of the road of course!
Lana picked up a brochure detailing the Kansas wildflowers at Fort Scott. It showed the flower with its season and other information. We were able to stop along the side of the road and match up our list.
We finally stopped in Hutchinson, KS.
at 9/07/2004 11:17:00 am