The last day. However we had to stop somewhere interesting so went to the Illinois Information Center. We discoverd Metropolis - the home of Superman - and were given discount vouchers for the museum. There is only one town in the US called Metroplois and they made a deal to be called the home of Superman, built a huge Statue of Superman and had a museum for tourists.
Also in Metropolis is the restored Fort Massac which had been used by the French, British and Americans at various times, until it was put in the hands of a caretaker who sold off the walls as building materials for the locals. He took care of himself very well. It was restored and the children had a good run around.
Finally we arrived home, exhausted but glad we had discovered some more of America. 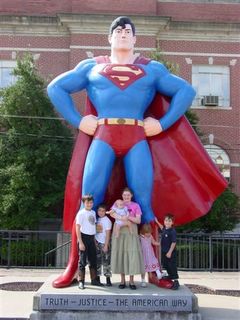