We started the day at 5:15am to get to the Denver Cathedral for Mass at 6:30 am. The Cathedral of the Immaculate Conception is a beautiful church built from 1906 to 1911 and has some fantastic stained glass windows and beautiful traditional altar. As the Mass finished the sun began to rise illuminating the windows. Like a new dawn all these images of scripture began to glow. No wonder the illiterate people of the middle ages knew their bible - it was told to them through innumerable stained glass windows in churches across Christendom. With the children, we pointed out various scenes including the Annunciation, Nativity and many more. For more details see here. 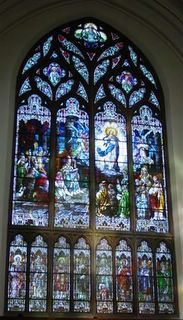 Then began the long drive to another homeschooling family living just South of Omaha, Nebraska - and our next host family.
After a long drive with few stops we arrived at our hosts' home. It worked out they were having their regular local Catholic family gathering and prayer night. Once more, before we could introduce the children they were inside playing with the other children.
Our hosts had very carefully organised things so we could all have our own rooms, but the boys wanted to sleep with their boys and the girls with their girls. A quick re-arrangement and they were done. Our families got along very well and the adults chatted till late, interspersed with a few “suggestions” to the children to go to sleep.
at 9/12/2004 09:58:00 am