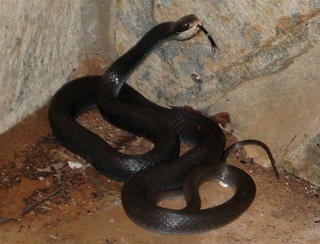 "I was downstairs and in the darkest part of the concrete and I was about to go into the dirt when the dark spot moved. It went squiggling real fast. It was a snake! So I ran inside up the stairs - barely touching them - and told Dad and Mum." narrated by James
After he rushed in warning everyone not to go outside because of the snake, we all went out and had a look. The snake was huddled in the corner not far from the downstairs door and was about just over one metre (4 feet) in length. Not knowing whether it was a good or bad snake I called our friend Donald who told me that up here in the mountains you need to see the snake's eyes. If they are round it is non poisonous, if slanted poisonous. I hesitated. To get that close seemed a bit silly if it was a poisonous snake! But Eric had his binoculars and was glad to be able to put them to good use.
The eyes were round, and I was told it was probably just a grass snake that likes to eat mice and small creatures. So, with a VERY long stick I encouraged it to "nick off" and it went away from the house, probably happy to be away from all this fuss and bother.
at 8/22/2005 07:30:00 am