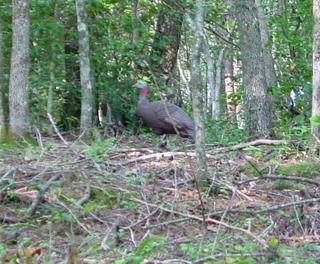 We were led by experienced turkey hunters and told the rules. A hunter can only shot a "bearded" turkey (also known as a gobbler) - a male that is old enough to have the special feathers that look like a beard. But - you can't shoot a hen, can't shoot more than one a day, can't have a house or another hunter in the line of fire. With all these rules in mind we were asked in various scenarios if we could shoot. In one scene just like this we all said "Yes" and then he said no - because a hunter was behind the turkey. Someone asked why the hunter wouldn't wear the hunter orange. Apparently the turkeys have good colour sense and camouflage is essential.
At one time, wild turkey, deer, elk and all the other wildlife that is subject to hunting in the US were depleted or almost extinct. Through wildlife management now there are an abundance and hunting season is an important method for keeping numbers down.
Young turkeys are known as "jakes" and junior turkey hunters are also known as JAKES - Juniors Acquiring Knowledge Ethics & Sportsmanship.
at 8/29/2005 04:35:00 am