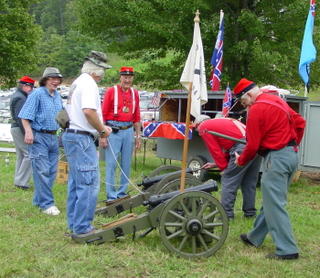 Yesterday we were fortunate enough to attend the first Annual "Scott Hogsed Memorial Youth Conservation Day". This is an event organised in remembrance of Scott Hogsed who died August 22, 1984 at the age of 15 in some accident on the farm. The idea had been percolating in the minds of his family and friends and this day teaching young people about hunting, shootting, fishing, wildlife and conservation is planned to become a regular event.
It started at about 8:40 with an opening ceremony including the national anthem sung beautifully by a young girl, everyone reciting the pledge of allegience, a short memorial to Scott and then the firing of 2 cannons by the Civial War society. Once the cannons went off, the car alarms rang out in chorus.
This photo is of the good old boys reloading their cannons. Between each session the cannons were fired to let each group know they were to proceed to their next stop.
at 8/29/2005 04:45:00 am