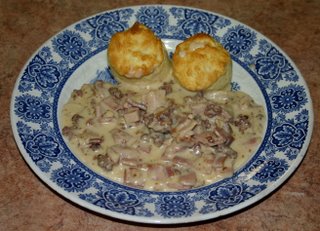 One of the culinary specialities of the US South is "Biscuits and Gravy". Our first thoughts on hearing the title was to think, "Why would anyone want to mix cookies [which is what we mean when we say biscuit] with gravy [juice from a roast]?"
Whilst eating a hotel breakfast Lana and Ariel noticed some other patrons eating white sauce stuff with what looked like scones. Lana spoke to the other patrons and asked what it was. Recognising our accents and being very helpful they replied that it was biscuits and gravy. We then realised that in the US biscuits refers to a scone like thing and the gravy was a white sauce with fried sausage mince.
Friends of ours then introduced us to what we called "The Breakfast of champions" whereby the sausage mince is fried with bacon and ham, and then flour and milk is mixed with the juices from the meat to make a very tasty gravy. The gravy is then poured over the biscuits. Yum.
We brought home a special seasoning the butcher/meat market in Georgia used and our local Australian butcher made up a batch of 25lbs/12kg of Breakfast Sausage. As he was handing over our purchases, the butcher commented, "that US mince smells all right."
We had it for dinner as it is too nice just for a hurried breakfast!
at 5/16/2006 10:20:00 pm

My mom had me so hooked on biscuits and gravy as a kid, I would accept all immitations. Canned biscuits and white gravy where the fat was crisco. I loved it, not as much as good gravy but I loved it....I should make my self tonight(husband doesn't like it). Now I am hungry....