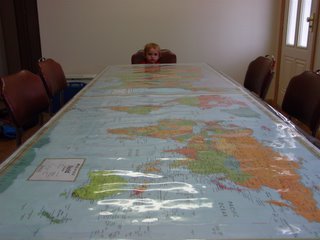 Lana wanted to use some very nice place mats she had made but didn't fancy the idea of washing them every day. To solve this problem we purchased some medium thickness plastic allowing about 15cm (6") overlap on each side to place over the table and put the placemats underneath.
This worked great. Then at Christmas we had some special patchwork Christmas decorations which could now be seen but not damaged.
Now we have placed wall maps of the world and the US under the plastic. In a few weeks we'll rotate the maps with ones of Australia and Europe and so on. The children have already been announcing, "I'm having dinner in the Pacific Ocean", or "Pass the Idaho" (where the potatoes are). Whenever something needs to be passed it is referred to by location, not name. It's amazing how quick all the children are learning their countries!
In addition, as the maps are already laminated, we have drawn our trip routes on them. We have spotted the children tracing the route and commenting on what we did along the way and people we met.
Placing them under the plastic on the table top has really brought the maps into full use.
at 1/02/2006 04:23:00 pm