May they rest in peace 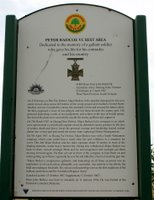 On the road between Sydney and Canberra are many rest stops honouring Australia's Victoria Cross recipients. The Victoria Cross is the highest award for bravery awarded to Australia's military men and women.
The rest stops are a marvellous idea. Whilst providing a place for travellers to stop and rest on the approximately 3 hour trip, they also provide fascinating information about those awarded the Victoria Cross.
Today we stopped at three of the rest stops to read the citations.
This one remembers:

On 23 February, in Phu Thu District, Major Badcoe with complete disregard for his own safety moved alone across 600 metres of fire swept ground and reached a United States Medical Adviser wounded by enemy fire, attended to him and ensured his future safety. He then organised a force of one platoon and led them towards the enemy post. His personal leadership, words of encouragement, and actions in the face of hostile enemy fire forced the platoon to successfully assault the enemy position and capture it.

On 7th March 1967, in Quang Dien District, Major Badcoe led a company in an attack over open terrain to assault and capture a heavily defended enemy position. In the face of certain death and heavy losses his personal courage and leadership turned certain defeat into victory and prevented the enemy from capturing District Headquarters.

On 7th April 1967, in Huong Tra District, Major Badcoe was with a South Vietnamese company which came under heavy small arms fire and withdrew to a cemetery for cover. This left Major Badcoe and his radio operator about 50 metres in front of the leading elements, under heavy mortar fire. Seeing this withdrawal, Major Badcoe ran back to them, moved amongst them and by encouragement and example got them moving forward again. He then set out in front of the company to lead them on and when getting up to throw a grenade he was hit and killed by a burst of machine gun fire.

"Major Badcoe's conspicuous gallantry and leadership on all these occasions was an inspiration to all, each action, ultimately, was successful, due entirely to his efforts, the final one ending in his death. His valour and leadership were in the best traditions of the military profession and the Australian Regular Army".

Peter John Badcoe was born in Adelaide on 11 January 1934. He was buried at the Terendak Cemetery, Malaysia.