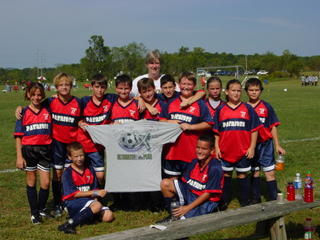 Soccer season began a few weeks ago and we knew we would be unable to participate. Then one of the coaches rang up (*) and asked if Eric could play. We said we were returning home soon, but they said that was fine.
So Eric was able to join in the training sessions and played three games.
On the last game his team gave him a T shirt signed by all of the players and the coach so he could remember his soccer playing in Georgia.