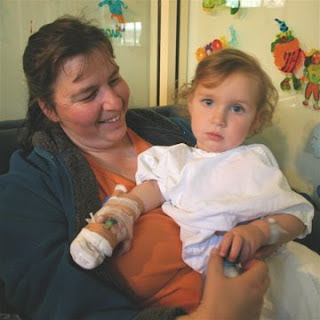 Yesterday Martin was not happy. When we changed his nappy we noticed a really big sore. Lana called me and we decided Lana should take Martin to the doctor.
At 4:00pm Lana was brought in to the assistant doctor. She took one look and called in the main doctor. Lana was sent to the hospital to check with the pediatrician and surgeon.
I left Sydney and met Lana at 5:30 pm and we waited around while various staff did their thing by walking in, asking the same questions, having a look and then walking out with very little information passed to us. I don't know why the interpersonal skills of hospital staff are so lacking. A simple, "Hello, my name is X and this is what's happening" would be great. Instead we had the "hurry up and wait" syndrome until 8:00pm when we discovered Martin would be staying at the hospital overnight ready for an operation first thing in the morning. Gee, thanks for letting us know this was happening guys!
Anyway, now the operation is over, we have finally been told that Martin had a perianal abscess. We did know that the abscess or tumor would have to be drained, but that is all we knew beforehand.  This is often caused by bacteria getting into a small cut or scratch near the bottom exit area and then having a party causing an abscess. So now Martin will be in hospital for the next day or so, having antibiotics to attack the infection and recover from the operation and anesthesia.
The hardest part was applying the cannula. As you can see by the photo it is well attached to stop Martin getting at it. He was wrapped in a sheet so only one arm was free. Lana hugged him tightly, one nurse held his upper arm and another held his lower arm. The pediatrician then inserted the cannula and applied the bandages. At times Martin was winning the struggle!
at 7/29/2008 10:26:00 am

Oh my word! It's a good thing you didn't hold off!

Best wishes for a speedy recovery for little Martin.