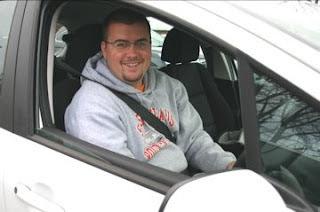 We are very happy we decided to volunteer to host the pilgrims. Initially we were concerned. "Would they be OK? Would they find it too chaotic here with the children? Do they speak English?" and so on. But we decided to just leave it in God's hands.
Do you know why our pilgrims stayed in the Wollongong Diocese? Because the name sounded funny. Through such whims, God works his magic.
Meanwhile, I thought we should give some more notes about our time with the pilgrims. The first photo is of one of our pilgrims (let's call him "A") on the WRONG side of the car. You can tell the photo isn't reversed as the text on his sweater isn't reversed.  Actually he is sitting on the correct side of the car, but you know how Americans are. :-)
One of the things A wanted to experience in Australia was driving on the correct side of the road - the Left side. So I was happy to oblige. On some of our quiet streets he had a test drive. At one point we did a 3 point turn and A instinctively returned to the right (incorrect) side of the road.
"Left, Left" I said.
"Yeah, I'll be turing left at the intersection" said A
"Left LANE!" I suggested.
"Oops." replied A and quickly changed lanes. 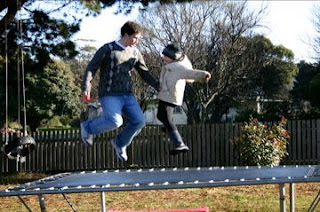 Sometimes the pilgrims just wanted to do simple things. Here is pilgrim C enjoying the trampoline with Peter.
You can tell by Peter's clothes that the weather was pretty cold. The week the pilgrims stayed with us was the coldest we have had all year. But this week has cleared up nicely and Sydney's weather is quite pleasant. Still, I wouldn't want to be camping outside overnight!
There is a chance we will be getting tickets to the actual WYD Mass on Sunday. This is pretty exciting news and we are making plans for a very long day. We are praying that it all works out with the simple prayer, "God, if you want us to go, you sort it out."
Cardinal Pell recently gave a press conference extolling Australians to have more children for all the benefits. However, I think he needs to get his bureaucracy in line as they still think a family is 2 adults and 2 children. Even the form Homestay families filled out only had room for eight people in a house.
at 7/17/2008 06:07:00 am

I would like to say thank you to you for extending your welcome to these pilgrims. You know I had no idea that homes were needed. We only heard of this through a distant relative in the US who told us some my grandmothers cousins grandkids were amongst the pilgrims and staying in a motel in Sydney if we wanted to meet them. I had assumed this is what was arranged for all, I have since learned that some poor kids are sleeping on cold floors. How sad. We were without a car this week so would not have been much help being two hours from Sydney but it would have been nice to be of some help. You are very nice people.

We are also about 2 hours from Sydney (South). To ease the congestion and provide some acclimatization, pilgrims spent time at "Days in the Diocese", which meant groups shared homes with families in Dioceses around Australia. Parishes basically volunteered and pilgrim groups said "That place sounds good" and were allocated accordingly.
There was a notice in the parish bulletin and we said, "Why not?" and put our names down.
The pilgrims are all now in Sydney - all across the suburbs you can see pilgrims walking with those bright red and orange backpacks.