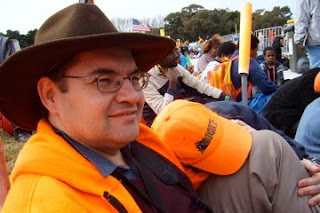 One of my clients was also at the Mass. He called me on my mobile as he figured that we would be there too. He said that he and his wife went for a wander to have a closer look at the altar, but when they turned back the way was blocked so he ended up with a great view of the whole thing!
In this first photo you can see how well we fit in with the Papua New Guinea pilgrims. Ariel has her head resting on me as she had a version of what Martin had and wasn't feeling the best. But she soldiered on, offering it up.
We met one of the ladies from our parish who was a volunteer providing information to all and sundry. She told us that "our" pilgrims were in section E1 - WAY over the other side of the venue. We figured the best time would be when everyone else was on the move at communion time.
Meanwhile we were able to enjoy the Mass with fine readings, music and ceremony. We could see the screens well enough and so were able to tell what was happening. 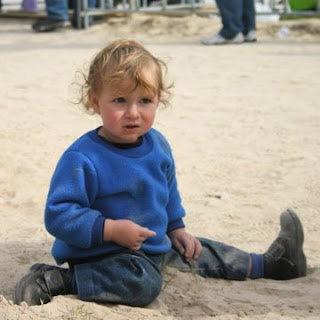 Those around us also participated in the Mass and it was a great feeling knowing you are part of a Mass with so many hundreds of thousands of other people. The Holy Father's sermon was in English, naturally enough, and he spoke it with only a little accent, and we were all able to follow along easily.
After the Homily, there was time for reflection and then the people being confirmed were announced and we all joined in sharing their baptismal promises. "Do you reject Satan and all of his empty promises?"
"I do" the huge crowd responded. These responses were made all the more impressive as they echoed around the huge venue.
Meanwhile Martin also enjoyed himself. We were next to the sandy part of the racetrack, so Martin figured this would make a great sandpit. Some of the Papua New Guinean girls were all smiles watching him play with the sand, throwing it all over himself. 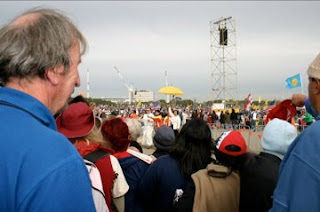 After the consecration it was time for communion. We quickly started off and across the venue via the criss crossing pathways trying to get near E1 and also receive communion.
Unfortunately, the paths were changed from the map we had seen. Also, there were so many people receiving communion that all pathways were blocked.
All priests with communion were accompanied by a "minder" carrying a large yellow umbrella to help everyone find a place for receiving communion. At one point we were stopped next to a space left free for emergency traffic, some of our nearby pilgrims saw a priest and started calling over to him. He noticed us and they came into the empty area and began distributing communion using the barrier fence like an Altar Rail. The altar rail method was much more efficient. Those at the front received communion and then made their way back allowing those behind to move forward. This changing of places all happened while the priest continued distributing communion along the line.
Then other priests were noticed and called to, and we ended up with three priests distributing communion. 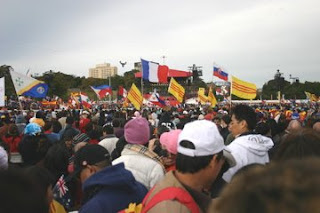 We then moved further towards the mythical E1, but the pathways had changed and the way was blocked by this crowd of people. Ah well. We stayed where we were hoping "our" pilgrims would stay around a little after Mass gathering their gear. Once Mass was over the exodus began. One American we spoke to said it was like "all the crowds caused by Hurricane Katrina - but nobody got killed".
We finally arrived at E1 but it was empty of people we knew. Later on we discovered they had also ignored their official places and were able to get right up the front, within a very short distance of the Pope and the Altar. We can't blame them for that!
at 7/21/2008 09:59:00 am