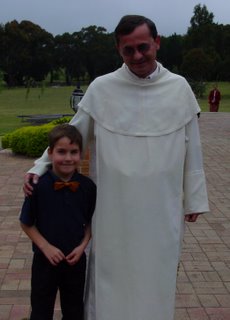 Sunday was the regular monthly homeschoolers meeting at the nearby monastery. This time it was extra special as Peter made his First Holy Communion. He has been ready for this for the last 18 months but was unable due to the bureaucracy in the local diocese in the US. Once we returned we spoke to the parish priest who knew Peter and immediately we arranged the day. Peter wanted to wear the bow tie for the special event. We wanted to also dress up in a white shirt and jacket but we don't have a lot of extra clothes after our return.
One of the homeschooling mums arranged the organ and a choir of young homeschool ladies to sing and we had a collection of great hymns which everyone sang proudly. There were two priests, two brothers and six altar boys.
A special kneeler was set aside for Peter to receive the Host and throughout Mass Peter kept telling us, "Soon!", "It's getting closer." and at the consecration, 'It's VERY close".
Aftwerwards you can see how happy he was standing next to Father.
We then spent some time with all the families at the monastery and then went to another friends place where two other boys had their First Communion too. With five families and 27 children we all had a marvellous time, not returning home until after 10:00pm.
at 11/23/2005 09:37:00 pm