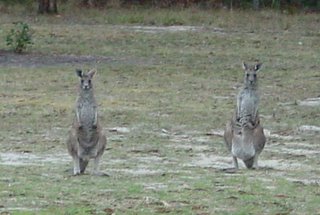 When we were in the US many people asked us whether we saw many Kangaroos. We replied that we often did. These two were at the local monastery and were part of a mob of kangaroos that live locally.
Whenever you drive in Australian country near dawn or dusk you need to be careful as this is when they travel the most. We did comment that we don't see them in town going down the middle of the road, just in the country areas.
Well, we were slightly wrong. On Monday Lana was in the local town dropping our van off for a service and returning home via the suburban streets. A kangaroo hopped out of someone's front yard and jumped right in the middle of the road. Lana travelled slowly behind him until he finally hopped up the next road and between some houses. He was obviously used to people as he wasn't in any particular hurry to get out of the way.
at 11/23/2005 09:47:00 pm