One of the biggest holidays of the year, almost rivaling Christmas and surpassing Easter is Thanksgiving. This is set for the fourth Thursday of November, since President Lincoln first pronounced it during the American Civil War (also known as the war between the States). It is to remind all Americans that they should give thanks to God for all the blessings they have been given. Of course, the public schools and modern books erase any mention of God and give an interesting rewrite of history. The first thanksgiving was by the Spanish and Indians in the 1500's in St Augustine in Florida. 100 years later, the Pilgrims were saved from extinction by some assistance from the local Indians. Once they abandoned their socialized economy and went to a free market, production boomed and they never went hungry again. 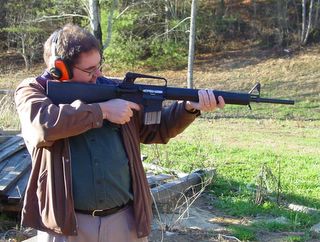 David firing an Assault Rifle at defenceless bits of wood.

In modern day America, giving thanks to God is still overwhelmingly the case with almost everyone getting together with family, sharing tables full of delicious food, and giving thanks for the blessings we have. Then every family has their own Thanksgiving traditions. This year we spent our Thanksgiving with the Morris family. After turkey, ham and all the trimmings, as well as Pavlova (the Australian connection!) we went shooting. A very nice dessert was pumpkin log.
at 11/30/2004 03:55:00 pm