Donald has a great collection of guns and after first doing a safety lesson we then had turns shooting a selection of his weapons. David, Ariel, Eric, James and Peter all got to fire the 22 rifle (at bits of wood as targets) and they all did pretty well. The older ones then fired the 22 pistol, and then David was able to fire the Assault rifle, and 44 Magnum.
First Donald fired the Magnum at a water bottle, demonstrating to all watching how dangerous guns were as the bottle exploded and the water vaporised. It didn’t look too hard firing the gun the way Donald did it, so David had a go. However, when he fired the Magnum, the recoil was much stronger than he expected. As his hand flew back from the force, he let out a loud and enthusiastic "Bloody Hell", much to amusement of Donald and his family.
They still laugh when they think of the depth of feeling one can get into that colourful Australian expression. 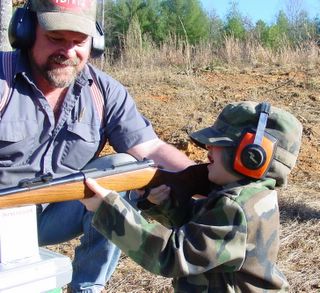