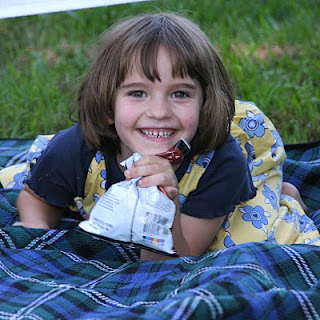 Clare came up to Lana and asked, "What does 'Ka Zoom Tite' mean?"
"Ka Zoom Tite? Asked Lana.
"Yeah, you know when people sneeze and some people say 'Ka zoom tite'!"
****
While we were at church waiting for Mass to start, Martin was doing a little climbing around and I asked him, "We are going to have another boy soon.  Who are the boys?"
I then asked, "Is Eric a Boy or Girl?"
"Doy!"
And then I asked about each of the children, and Lana was a "Dirl".
"Am I a boy?"
"Mm, No!  You Dad!"
"I'm not a boy?" I confirmed.
Martin shook his head and pointed at me, "Dad!"
****
Rose had been watching some "I Dream of Jeannie" episodes on DVD.  She thought the concept of a Genie able to "bing" her head and make things change was pretty funny, so she started going around the house pointing at people, "Bing! You beard!" or "Bing! You long hair!" then giggling at how she imagined her target would look.
****
Rose had been listening to some children's songs including "Bananas in Pajamas".  She thought it was pretty funny but decided to make up her own version, "Piranas in Pajamas".

The children that I teach tell me that I am not a girl but a teacher!

Supper collection, thanks for sharing.