Is this the last child? 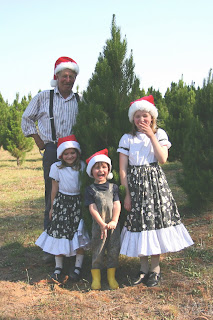 We have lost count of the number of times friends, acquaintances and complete strangers have asked us, "So, is this the last one?" in relation to the impending arrival of the next Bruggie Baby.
Lana has perfected the best response.
"Yes," she replies, waiting while the questioner gives a sigh of approval or "understanding", and then completes her sentence, "But then, this is my fourth last one."
In fact, each child has been the "last" one until the next gift has come along.  This is a photo of the last three last children enjoying a photo session with a local farmer at Christmas time.

Further valuable information is imparted to us when we share the size of our family with people. Apparently television has a completely undocumented, but very well known, function.  In olden times TV was said to rot the brain.  Nowadays it is commonly held to prevent children from arriving.  "Don't you have a TV?" is the common cry.
My response has been, "I missed the big sign at the Electrical Retailer. I saw the ones telling me the screen size, pixels, brightness and price, but TV's contraceptive powers were not in the brochure."

So sometime in the next 3 to 4 weeks, we will be celebrating our victory over the child defeating power of television with the arrival of our last child.  This time.
at 2/03/2010 08:15:00 pm

Congratulations. May God continue to richly bless you and your family (regardless of how many last children you have)…

Someone at church once comment that they didn't think all the children in the world should be raised my amateurs.

My reply would be to pity the poor children raised up by "experts". Most of the so called experts have few or no children. Why is it that in all other areas experience is an indicator of knowledge EXCEPT when it comes to raising children? Shouldn't we turn to those parents with children and get their truly expert advice?

I once had a few work colleagues laugh at me when I said I had no TV. One said "no wonder Catholics have such large families" while sniggering away...

Then I said to them "...so you'd rather watch TV than have sex?"

The look in their eyes as they thought about it... then one said "hey yeah... how dumb are we!"

We also have a large family (seven kids). When people ask us things like "are you having any more?", our standard response is "all of our children are planned... just not by us"