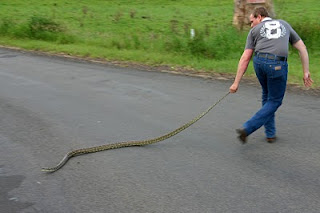 Last week Eric and I were up in country Northern New South Wales helping friends of ours set up the systems for a new business.
On the way home one afternoon our friend was driving along the country road and suddenly slammed on the brakes.
"Ooh! A snake!" she said.
I quickly grabbed the camera as she backed the car to a more safe distance. The snake was a large carpet snake lazily resting right across the road - all 10 feet or so. I took some lovely photos and we looked out for other cars so no-one would mistakenly run the snake over.
A local fellow was coming out of a nearby driveway and asked what we had found.
"A snake. Any idea how to get it out of the way? We tried throwing a few sticks at it, but the snake didn't care much."
He didn't say much but came out of his vehicle and strolled over, examining the snake. He then went to one end and grabbed his tail, with appropriate small leaps worthy of the late Steve Irwin, pulling the snake across the road.
But the snake had other ideas. He wanted to be back on the OTHER side of the road. So we wisely left the snake to go back across the road to where he wanted to be.
Ah. Steve Irwin would be so proud!
at 1/09/2010 07:23:00 pm