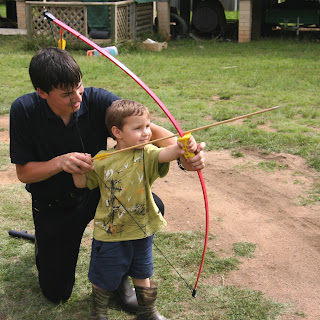 We had a guest the other night joining us for dinner.  After the meal when the children were cleaning up and washing dishes, our guest asked, "Don't your children fight?"
Lana and I looked at each other and pondered.
"Not really," we replied, "They have occasional disagreements but these get sorted out pretty quickly."
"Don't they yell or scream at each other?" our guest asked in amazement.
"Rarely, but we stomped on that behaviour very early on and now they have learned appropriate conflict resolution skills.  Also, when the children fight over something - a toy, a game or anything - we will get the object in dispute and tell them 'If this is causing you to fight, we don't want this thing in our home' and then throw it in the bin.  Pretty quickly the children learned that it wasn't worth fighting over 'stuff'"
"Hmm," he said, sitting back and watching the children singing off key - but loudly - and obviously enjoying themselves while they were cleaning up.
That is one advantage of homeschooling.  Rather than being thrown into the school jungle with no direct adult supervision, they are able to learn from adults when the problems occur, as memories are fresh and actions are obvious and not distorted by time and emotion.  Of course, the pressure was on Lana and I to grow up too, which was probably the hardest part.  We can't expect them to follow appropriate problem resolution techniques if we are squabbling over stupid little things.
"Ahh, but what about when they get in the 'real' world?  How about then huh?"
We actually believe the family is the "Real" world.  School life certainly isn't real life as what works in school doesn't work anywhere else.  So assuming "Real World" means the workplace, shops, sports and everything outside of home and school, we can answer that our methods work very well.
One on one taught conflict resolution techniques work great in the "outside" world.  The children have been performing admirably in the shop and in sports teams in which they have participated.
So, the experiment continues...
Previous articles about sibling rivalry are here and here.

(The photo is of Eric teaching Martin to fire a bow and arrow.  Martin concentrated very well and once he fired his arrow he went back to his primary role of arrow fetching.)
at 1/31/2010 08:59:00 pm