We did say that we looked forward to experiencing the US medical system, but did not expect it so soon. David picked up a cold on one of his trips to Denver and shared it (lovingly) with Lana. Combining morning sickness, coughing from the cold, and general tiredness, Lana was exhausted one night with a pain in her lower back coming round to the front. The pain was such that from the time of going to bed at 6:00pm until 2:00am Lana still had no sleep and the pain had not abated. We then did some phone calls, which ended up with the advice, “Go to the hospital and let them have a look.”
Off we went, waking all the children and went to the local Hospital. After pressing the emergency bell a few times, waiting in the cold night air, a nurse finally opened the door and ushered us in. Lana was given a chair, gave David a plethora of forms to fill out, and then ignored us for about an hour. They had another patient to deal with. We were glad they did not have a major emergency – like 3 patients – to deal with or we may have been in trouble. A nurse asked Lana lots of questions that we answered and we were moved into an emergency room, which based on the temperature, must have been a part time refrigerator. During the next hour, a different nurse, then a doctor, referring to a clipboard with the answers we had given, asked us all the same questions and wrote the answers on another bit of paper. But still no pain relief - despite having mentioned in the first lot of answers that the pain, on a scale of 1 to 10, was about a “9”. Luckily, they did tell us where the blankets were and so we wrapped each of the children up, as the temperature must have been around 3C.
Finally, they administered some pain relief, and about 1.5 hours later, another dose, and Lana’s pain finally began to subside. 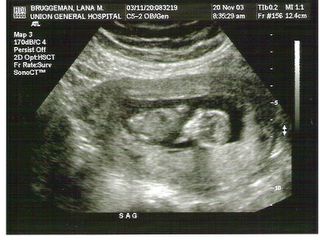 Baby at 13 weeks - looking well.
We had an ultrasound due to the location of the pain, and the baby was fine. It even hiccoughed whilst we were watching. The only issue was a blood clot on the placenta. This was not considered a major concern, but Lana was to get rest. With a prescription for pain relief, we all finally left 6 hours after our arrival and went home. For the Australians reading, the cost of this without insurance would have been $774 (US). With insurance, the cost was $127 (US).
Lana then proceeded to rest. She slept the next 30 hours straight, followed by lots of rest for the following week or so. With the cold going away and the morning sickness past all was well again.
at 12/31/2003 02:37:00 pm