Dorothy the Dinosaur has changed 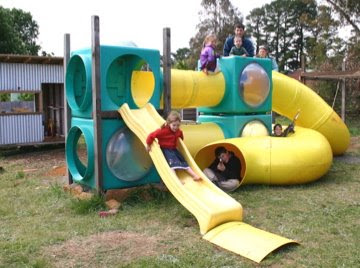 Some time ago we were able to get hold of some old playground equipment. It had originally belonged to a Fast Food restaurant which had upgraded, then it was sold to someone else and sold again. Each time it had not been assembled as it probably looked like a good idea at the time of purchase, but it was just too big for a typical suburban back yard and too much for the one or two child families. We were able to get it for $500 and we promptly put it together. Being Green and Yellow it looked - kind of - like Dorothy the Dinosaur from the Wiggles.
This was disassembled to make way for the new, improved playground and has now been reborn. The addition of a new slide and "Voila!" the children have more things on which to play. They were too excited to help very effectively. As each piece was put together with much grunting and groaning by our builder friend and Lana and Ariel, the younger children were climbing over everything.
This isn't too bad a playground for a private backyard.

(Where were Eric and I while all this hard labour was going on? In the city, working at one of my clients. Eric is assisting with some data entry, providing a very good source of labour. The client wins, Eric gets some income and also some good experience, and I get fine company at work.)
at 10/23/2008 04:29:00 pm