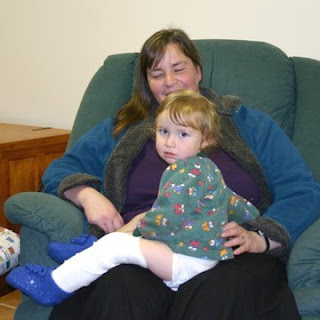 Here is Martin. He has a broken leg.
Yesterday we had a great day planned. Lana, Ariel, her Mum, sister and friend all were going to the Sydney Stitches and Craft show. This was a good opportunity for us to visit friends nearby so we all went up, dropped the rest of the children at the friend's place, picked up Mrs Friend and two of her daughters, dropped the giggle of girls off at the show and Mr Friend and I had a good day chatting away and minding the children. There were 11 children under our diligent care and there were no problems at all until right near the end.
Mr Friend and I heard a cry from the back yard. We recognised it as *that* sort of cry and quickly went outside to see Martin crying while trying to climb the ladder of the slide, but he couldn't put any weight on his leg. Clare told us the concrete bird bath had fallen on his leg. Mr Friend and I exchanged glances and I used diversion therapy on him by changing his nappy (diaper) and water soaked clothes. A bruise was quickly forming on his lower leg and we knew that had to hurt. But was it broken? We couldn't tell but he was pretty unhappy.
We think Martin must have lifted himself up by the edge of the birdbath to see what was in it. The base cracked, the top fell on top of him and covered him with water. Clare lifted the bird bath off him just before we got outside to see what was happening.
I went and picked up the giggle of girls and returned. Martin was very glad to see Lana but still wasn't happy. So we returned home. Overnight Martin awoke a few times but slept well.
This morning we decided we had to go to the hospital with Martin. Again. Lana went with her Dad while I took the rest of the family to Mass.
Sure enough, the leg was broken. The main bone had cracked about 3/4 through. Martin now has a support behind his leg and bandages. In a few days when the pain and swelling dies down, we will go back for another X ray and probably a cast of some sort.
I think the hardest part for the next few days will be trying to keep Martin from getting up and running around!
at 8/24/2008 06:50:00 pm

Oh ouch! The poor kid. I hope he gets better soon.