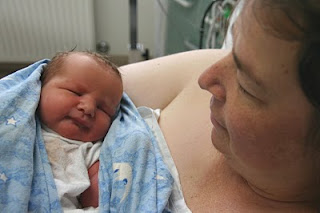 I visited Lana and Zach this morning with the four younger children.  (Tonight I will go with the older ones)
The doctor visited the room while we were there and excitedly showed the children how the baby came out. The children were very interested. They had already seen the photos I had taken of the delivery room which helped to give them some background.  These photos showed what happened but did not include any of the graphic bits.
Afterwards the doctor was standing next to Peter and asked him what he wanted to do when he grew up.  Would he want to be a doctor?
"Well," said Peter seriously, "I have a list and it is growing shorter."
"Is medicine on the list?" asked our doctor with interest.
"Yes." replied Peter.
The doctor smiled and waving his finger in the air to emphasise his point, said, "20 years from now."

Also visiting was a trainee Doctor who had an interesting path to medicine.  He had initially completed his HSC and started a commerce degree at University.  But he realised this wasn't for him and left after 6 months, starting work at a company packing boxes.  2 years later he had a calling to join the Ambulance service and did a 4 year ambulance course.  Still enjoying medicine, he began a full time medicine course and 4 years on is doing his final year, assisting at hospitals and the birth of Zach.  I really appreciated hearing this story because it shows that you can d what you want if you really have the calling.

Congratulations!! He is beautiful. Love the name.