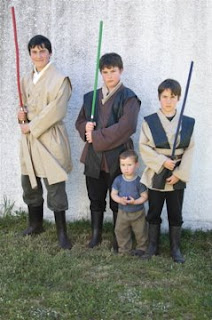 The whole family worked very hard over the last few weeks getting ready for the big birthday costume party bash. Four homeschooling children turned 18 in the last few months so they combined together to have one big birthday at the local hall. And it was a COSTUME party. Woo hoo!
The boys wanted to go as Jedi - but good ones. You know, the sort of Jedi that don't steal children and leave their mothers behind or breach someone's free will by using mind control. And they only fight in just wars.
Eric had purchased a visual guide a while ago and it includes almost every character from the Star Wars universe with lots of photos. This was the pattern for their costumes.
Lana found the material through a neighbour and we were given some old leather that friends didn't want anymore. Combined, Lana and Mum were able to make a robe with belt and sash and all the appropriate bits.
The boys made light sabres from an old pipe with matches and other bits and pieces glued on and painted for the buttons and so on. The poles were made from "Black Boy" bushes and painted with bright paint.  And they were able to wear their gum boots (rubber boots) out to a party. 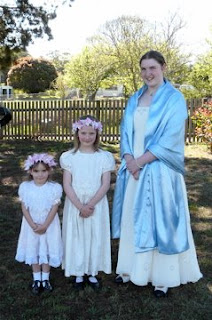 The girls were another joint effort.
Clare was finally able to wear a lovely white dress we had been given by one of our American friends when we lived in Georgia. It now fits and Clare was very excited to be able to finally wear it. Rose's dress also came from the US from a thrift store (Opportunity shop). It had originally been bought for Clare but now fit Rose. Never throw away a nice dress when smaller sized children follow.
The floral crowns were made from ribbon and some wire and artificial flowers Grandma purchased. Opa twisted the wire, then Lana and her mum glued the ribbon and flowers to make a crown which fit their heads.  Only a few minor wounds could be shown for the effort.
Ariel wanted to go in a nice dress costume. So, off to the opportunity shop (op shop) for shopping. The dress was based on one purchased for $12.00. Lana and Ariel examined the options and found a white dress which could be said to be from the Jane Austen era. Perfect! This was adjusted to fit Ariel better, and it was jazzed up with a collection of 26 applique flowers which Ariel sewed on all week. The blue robe was a sheet(part of a set) and cost $1 and was then sewed in half. Ariel found the shoes at another op shop for $1. You've gotta love those op shops for great clothes! 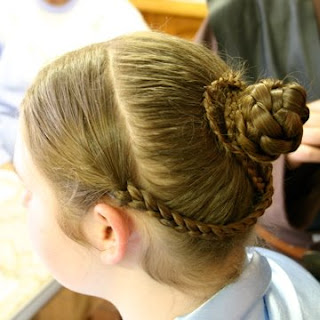 The last bit was Ariel's hair. Lana and Ariel looked online and found various hair styles which were appropriate and Lana proceeded to do the braids and bun and ribbon thing. Here is a close up so you can see the pattern. I think they all scrubbed up pretty well.
It was a good team effort.  Lana, her mum and Ariel combined their talents to create some great costumes for very little cost.  A fine example of low cost fun.  I am sure the boys will be wearing their costumes often.  They were made well knowing that they would have to stand up to a lot of enthusiastic play.
at 9/28/2008 07:30:00 pm

You must have been so proud, they all look so wonderful. The older children look so grown up! Ariel is just a lovely young woman. The hairstyle suits her!

Congratulations on a job well done.

Wow, that hair is just beautiful, I really like it. What a good job!!

The costumes are fantastic!
:)