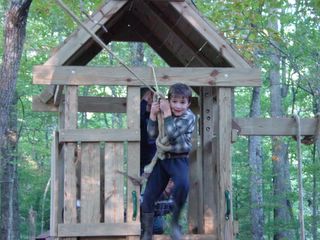 James taking a leap of faith


Remember the playground? It has been getting a lot of use by all the children. But, boys always have a better plan.

Before the playground was built, Lana heard Peter crying outside. Upon investigation, Lana saw James and Eric on the decking pulling a rope. She quickly rushed to the edge and there was Peter sitting on a bit of wood tied to the end of the rope and being let down. He was crying because Eric and James realized he was too heavy to pull all the way and they were letting him back down.
So, they completed pulling him up and pulled him through the balcony. Just remember, young children will give us all plenty of evidence for Guardian Angels.

Last week, the boys had a new plan. They tied rope from the fort/playhouse to a nearby tree. Combined with the loop from the end of the very thick rope we had been given, they created their own flying fox.
at 9/30/2003 01:37:00 pm