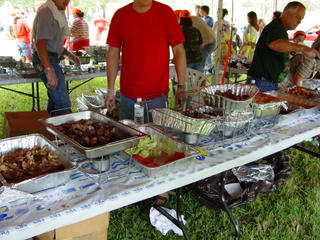 After all the sections were completed by about 12:40 everyone was able to participate in a fine wildlife lunch. The fellow behind the table pointed to each meat tray commenting, "Deer, elk, bear, turkey ..." and so on. I suggested that he could be just making it all up and we wouldn't know any better. He replied, pointing to the tomatoes and said, "Well that's tomatoes, and ... " pointing to the spaghetti, "that's spaghetti meat!"
The event had at least 412 children registered, their families, helpers and others and there was food left over. There was no charge and they even had lots of door prizes at the end. The children learned about hunting and wildlife conservation and we all enjoyed a fun - and tiring - day out.
As the fellow giving the opening prayer ended, "God bless all y'all."
at 8/29/2005 04:15:00 am