Meanwhile the girls did... 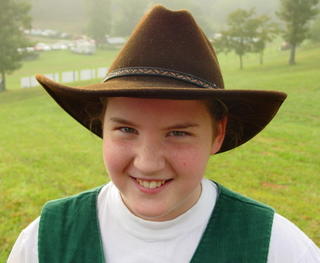 (written by Lana)
The Scott Hogsed Memorial day was really for our boys. Girls were encouraged to join in but our girls didn't really want to participate. We knew friends there so I was able to do my cross stitch whilst our friend Angela spun wool on her spinning wheel. Clare enjoyed herself playing with Christianna - a friend about the same age as herself.
Ariel helped by taking Clare, Rose and Christianna for a walk to the colouring-in tent and generally do a small bit of exploring.
Angela and I moved from shade to shade during the day and many people stopped and asked us what we were demonstrating. Angela replied we weren't actually demonstrating, we were just making good use of our time. If they asked further she gave them quite a good explanation of how the wool was spun and how the spinning wheel worked.
One of the shade spots we had our eye on looked really good. But then we saw it just wouldn't do as the civil war guys fired the cannons in that direction!
Ariel did get a T shirt and they both shared a goodie bag at the end like everyone else, so they weren't completely left out. In this photo she stole David's hat.