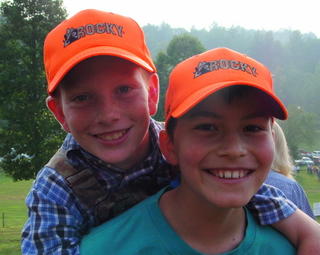 We were told to be at the site by 7:30, so that meant getting up at around 6:00. So we awoke at 6:21 and left the house by 6:40 and arrived at 7:15. I thought that wasn't too bad getting everyone awake, dressed and in the car in under 20 minutes.
Upon registering each child received a bright orange hat. This is called "Hunter orange" or "Blaze Orange". It can be seen for quite a long way. As the event was meant to begin at 8:00am and people kept arriving and it was delayed until 8:40, the children had a bit of time to play with their friends. Here Eric is giving a piggy back ride to his friend Elijah.
Each group made it's way along eight events: Turkey hunting, First Aid, Environment, Elks, Coon hunting, Fishing, Shooting, and Archery. Each event was 30 minutes, separated by two cannon shots from the Civil War guys.
at 8/29/2005 04:40:00 am