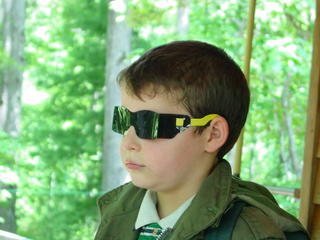 For some time we have been concerned with James' reading level. It wasn't where it should be, but it appeared as though the reason was more of James' wilfulness and avoidance. I was working from home and heard Lana discussing it with James and called James into my office and asked him to read to me.
James tended to guess a word after reading the first letter or two and then had a quite irrelevant guess at others. I stopped him on one word and asked, "Are the letters moving around?". He admitted they did and the letters weren't always clear. Aha! We finally worked out why he wasn't up to par. He couldn't focus on the words. We organised an appointment with a local Optometrist for yesterday.
We discussed with James why he hadn't mentioned anything. He told us he didn't want glasses and didn't want to be different. Once we started going over the situation more and pointed out other children we knew that had glasses, and I told him what it was like once I could really see when I had glasses he started noticing LOTS of people with glasses. Then he became more interested in getting glasses and not so much "being different" as "being special".
The Optometrist discovered that James sight is actually OK (20/20 vision) but his focussing is not as good as it could be. This meant all he needed was some reading glasses and he may well grow out of it. Special eye drops were placed in James' eyes as part of the tests. This made James eyes very sensitive to light and made everything blurry. But the doctor was supposed to help his sight - not make it worse! He was quite upset.
The optometrist office gave James some plastic sunglasses to wear whilst he was outside for the next day until his eyes returned to normal. James didn't mind the cool sunglasses. Next week we will be getting his reading glasses.
at 8/15/2005 03:03:00 am