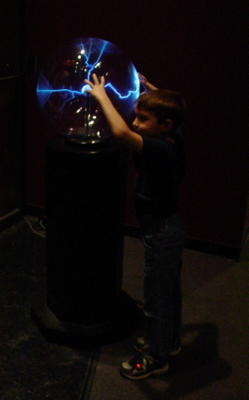 We attended the "Combustion show" at the McWane center which explained about combustion - fire and what it takes for combustion to occur.
The examples and demonstrations were very effective, showing how a US $1 note wouldn't burn after a short wave over the flame (it is cloth not paper), so the demonstrator soaked it in an alcohol solution. As it wasn't the demonstrator's money (he had borrowed it from an audience member) he wasn't concerned.
He then placed the note above the flame and it was surrounded by fire. The fire went out and the note was unharmed. Why? The alcohol solution was 70% alcohol and 30% water. The alcohol burned, and the water soaked into the note.
There were four floating balloons attached to weights. The first was filled with helium. As an audience member placed a flame near the balloon, it popped but there was no flame or explosion. The next was filled with Hydrogen. Remember the Hindenberg? The same happened here - flame and explosion. The last two balloons had gasses which when combined would also explode. James volunteered to assist and had quite a surprise at the loud explosion.
The photo is of Peter playing with the electricity ball that was on as we came in. Peter's shoes have lights in them, but they only flash when he walks or jumps. When he placed his hands on the ball and the electricity connected to his hands, his shoes lit up. Feel the power!
at 8/07/2005 05:20:00 am