On Christmas day we all enjoyed the joy of the season and ended at a friend’s house and were able to borrow their grandparents and family. The children all joined in a nativity play David created. He tried to find one on the Internet but they were all “re-interpreted” or silly, so he went straight to the gospels of Luke and Matthew and made a play straight from the text. It worked out great.
The children all did well and we will do even better next year. The borrowed grandparents and Aunt were delighted to be able to take on their role as the audience.
We have put a copy of the Nativity play into the Bruggie Tales folder on the web site. 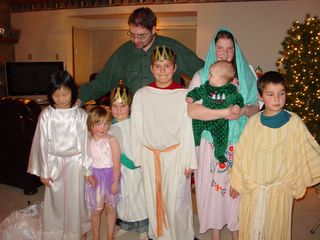