'Twas a dark and stormy night 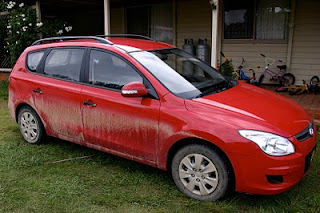 The night was stormy.  Power was down.  Lana was resigned to being due a week late.
So, naturally Lana's waters broke at 4am.
That was something new.  So by the light of an iPhone torch we gathered some towels and plastic bags and went to the hospital after telling Ariel what was happening.  The car had been packed for a week or two already so departure was relatively simple.
Lana prayed quite a few Hail Mary's not to have the baby in the car, and without speeding we arrived at Hospital just before 5am.
Contractions began shortly later but were sporadic.
With a drip attached, contractions increased but were still sporadic.
The contractions grew stronger, but by about 15 hours after the waters broke, Lana had only gotten to 3 cm dilation. (The baby needs 10 cm to escape)
It wasn't going to happen naturally.  It was time for a Caesarian section.  At least this time it wasn't the same mega rush of Martin's birth, but it was still very quick.
Continued in next post ...
at 3/02/2010 09:27:00 am