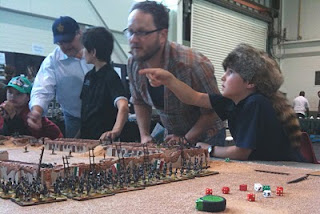 Every year we try to attend Cancon, a games convention held in Canberra.  This is the same convention at which I met Lana 23 years ago!
The tradition has developed in the family whereby I take the boys out to the convention and Lana and the girls have a tea party at home. (Past posts about this day are here, here and here.)
This year there was a magnificent game of "The Alamo". Peter was able to take on the figure of Daniel Boone, so was privileged enough to wear the 'coon hat. 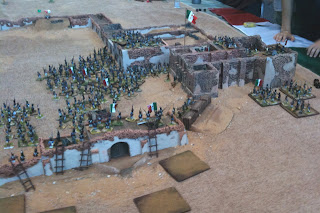 The fellows that ran this demo game built and painted all the scenery and models.  As you can see from the photos, the fort has been recreated marvellously.
The rules were very simple.  The Texans can shoot up to 24 inches and need a 4,5,or 6 to kill a Mexican.  The Mexicans can shoot up to 12 inches and need a 6 to kill a Texan.  A cannon can shoot using 6 dice.  Hand to hand combat is the highest die roll wins.  For the first 90 minutes all Mexican casualties come back as reinforcements.  The game lasts for 2 hours and the Texans have to have at least one man surviving.
The bottom photo shows the hordes of Mexicans that have broken into the fort preparing to assault the last Texans holding out in the ruined Church.  The Mexicans won this game on the last turn.
Meanwhile, Eric was able to join in a Renaissance wargame between the Italians and French, and James enjoyed watching the competition of Lord of the Rings wargaming.
Lana and the girls had a lovely tea party at home, with everyone getting dressed up specially, all the fine cutlery and plates laid out and fancy food for all to share.  According to Rose, one of the highlights was that Martin "even had a glass cup and plate and he didn't even break them!"
at 1/25/2010 08:05:00 am