Our First experience of Halloween.

Lots of people have expressed surprise that Australia doesn't really DO Halloween. More children try, but most people resist the temptation..
To understand the phenomenon, Lana asked a lady we met in Walmart "How does Halloween work?" The lady mentioned that one could find where to go collecting by asking around about "Hot spots" - neighborhoods that are "good". These are basically safe places to go that have really good candy. She also mentioned precautions and safety measures after just door-to-door stuff. Safety tips include: Before you let your kids eat any lollies check that they are wrapped. Don't take anything unwrapped. If you get fruit cut it in small pieces. You can also take it to the local hospitals - they will scan it for you to look for anything metal. The Union County Hospital and one in Murphy were offering this service.
Going to the town squares, with all the shops, police station, restaurants and supermarkets is good too. We went to the Blairsville town square. There were lots of people walking around with their children, teens and Grandparents. One older man in a wheelchair was having a great time being pushed around and giving away candy. The costumes were varied, although there were not too many home made ones, mostly store bought that started to repeat the longer you stayed. 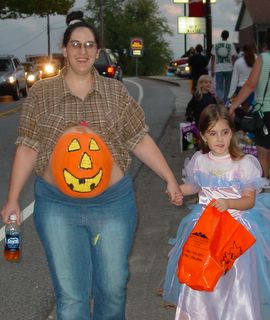 Even the baby unborn gets to join in Halloween!

One unique costume was by a pregnant lady - she had opened her shirt from the bottom to over her belly and painted a large pumpkin covering her belly. David knew her from a restaurant near his work and mentioned that he had seen her costume. She replied, "Well, the baby should have a costume too!". She mentioned she had mixed reactions, but overall it was a very clever costume.
There were a lot of princesses, Spiderman, Batman, witches, pirates, clowns, pumpkins and brides. There were very few "evil" characters - probably indicative of the area in which we live. The little children were very cute in their animal costumes, dragons, bumblebees, chickens, pony, and fairies. A lot of the community joined in, the police station, ambulance, the supermarket, pizza places and even the local pool hall.
It was celebrated on Saturday, rather than the actual day because Halloween fell on a Sunday. In this area there are certain things that are appropriate to Sundays, and Halloween is not one of those things.
at 11/30/2004 03:32:00 pm