David was once more able to visit Australia for a very quick two-week trip in early November. His mission was to assist one of his long time clients upgrade to Greentree Accounting software. Although it was a very busy time, the client was up and running and getting lots of benefits from the new system.
As a further benefit, last time his trip timed perfectly with the marriage of his sister Colette to Tim. This time he was able to attend his father's birthday and even more importantly, was able to see the newborn daughter Lauren of his brother Philip and his wife Michelle. She is a very cute little lady and should grow up pretty tough with two active older brothers. The children were very excited to have a new cousin.
A secondary mission was to bring back important supplies to the family. Both of his bags were very full of goodies, including a cricket set, some Dream Angel Spring Pillows, Australian Jigsaw puzzle and ice block tray, Australian DVDs, and lots of good food such as Vegemite, Caramello Koalas, Turkish elight, Violet Crumbles, Crunchies, Pucnics, Snow flakes, Smarties, Clinkers, Cherry Ripe, Fruit Tingles, Snakes, Jelly babies, a variety of Cadbury's chocolates, Sultanas, Jersey Caramels, Chocolate Bullets, Vita Brits and a few more. The bags were VERY heavy.
When he arrived in Atlanta, only one bag popped on the carousel. After the plane had finished unloading her reported the missing bag, and waited for the next two flights from Los Angeles to make sure it hadn't just been missed. After about 2 hours, he had a phone call that they had found my bag. It had lost it's Airline tag, but my address tag was there and they had called Lana who told them I was there looking for it. After going to four different places they found the person who had called David and our goodies were safe. 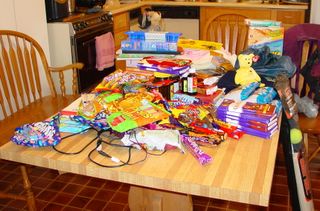