Soccer for young and old

All three boys have been playing soccer this season. To avoid timetabling hassles, Peter and James were with the same coach (seen in the photo below behind Peter) and Eric was in the coach's daughter's team. It worked out evry well. All the boys did well and enjoyed their season. This is a recreational league with no finals or ladder.
Typically sports in the US tend to be school based. As each county pays for the schools in the area, the county facilities tend to be associated with the schools. So it can get tricky for those not in the public school system to be involved in many sports. This league was started a number of years ago by some homeschooling families who negotiated for use of spare land next to a local bottling factory. Each season the competition grows with more players and teams. 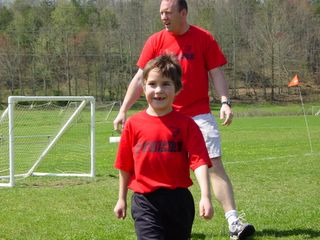